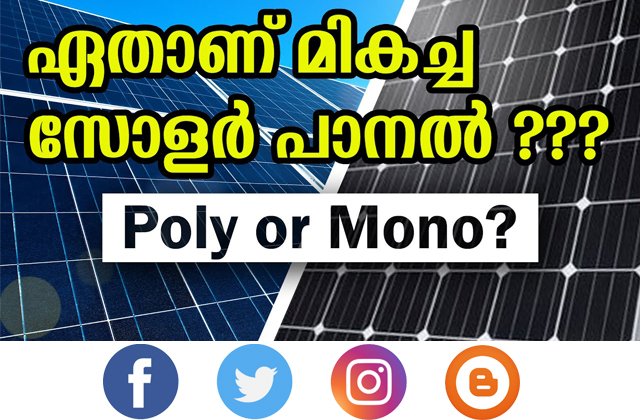 Murickens group, an ISO 9001:2015 certified company introduces two registered brand names"MG"and"Flyline"with the intention of saving of power by manufacturing and promoting solar based home appliances and lights that work with the help of high quality power generating solar panels. FLYLINE SOLAR POWER GENERATING CELLS Solar panel convert light energy from the sun rays into electricity by means of photo voltaic effect and most solar panels are made up of silicon photovoltaic cells. For this crystalline silicon cells or thin film cells based on cadmium telluride or silicon are used. There are many arrays of cells and each cell is connected together for completing circuit for a specified wattage. Connections are made by silver, copper or non magnetic conductive materials. D.C. electrical connections are made up of series and parallel to get desired voltage and current. Also diodes are used to protect reverse current due to the cause of shading effect. Glass is used in front of the cell to allow light to pass through it and also protect the unit from the external damage. Solar panels are less efficient at high temperature and hence good ventilation is required under the panels and now a days mirrors and lenses are used to improve the efficiency of solar panels. The solar generated DC electricity is simply flowing to inverters by converting it into AC to fulfill our domestic power requirements. Advantage of mono crystalline - is most efficient and most dependable way to produce electricity from the sun. Comparing to polycrystalline mono is 20 to 30% more efficient, because each module is made from a single silicon crystal and is more efficient than polycrystalline. The silicon crystal used in single cells must be requires a much higher purity level. Mono-crystalline solar panels are first generation solar technology and have long time durability. It produces more electricity per square meter. 2. Flyline Polycrystalline cells :- The cost of production of polycrystalline is less than that of mono-crystalline, is very commonly used. Polycrystalline cells are constructed by the method of molten silicon is poured into a cast instead of being made into a single crystal. This material can be synthesized easily by allowing liquid silicon to cool using a seed crystal of the desired crystal structure. High temperature chemical vapor deposition (CVD), is the other methods for crystallizing amorphous silicon to form poly silicon. In this process, silicon pieces are melted in a ceramic crucible and then formed in a graphite mold to form a block of silicon. As the molten silicon is cooling a seed crystal of the desired crystal structure is created for formation. For this process only less silicon is required and thus manufacturing cost is reduced and that is why the efficiency is poor than Monocrystalline. 3. Flyline Thin film solar panel :- These are most advanced flexible model solar panels. We can install it in any curved or plane surface where sunlight is available. Thin film solar panel is more efficient comparing Poly and mono crystalline cells but the main drawback is lifetime is only half time than Poly and mono Crystalline cells.Read More